This obituary appeared in the NYT this week although he passed in August. He was behind many great educational movements—one of which was the Annenberg study that profiled place-based education early on. He also wrote a wonderful book about Leonard Covello who was a principal in Harlem in the 30s–its a bold view of school leadership. 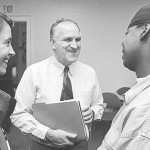 This is one of my favorite quotes:

“Students see homelessness and poverty in the streets around them, they know about immigration as they hear so many languages spoken, they are aware of community violence, drugs, war and the threat of war. That schools don’t explore such issues deeply, for the most part even ignoring them, reinforces for students that the schools are about something other than the realities of the world. Further, the content of schools seldom relates to what people in a particular community care deeply about. Schools don’t often make the local community architecture or its historical and cultural roots a focus of study. The community’s storytellers and craftspeople are not common visitors. The literature that is read is seldom selected because it illuminates the life that students see day in and day out outside the school. This disconnectedness trivializes much of what students learn.”